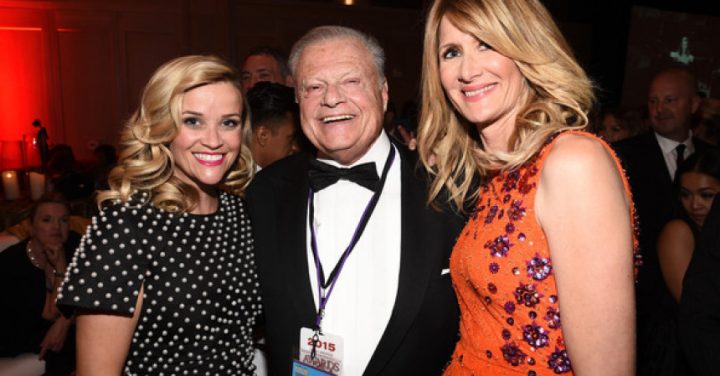 The Palm Springs International Film Festival Awards Gala began its second 25 years with the blossoming of a new generation of stars.

The honorees were selected for this first big event of the Oscar campaign season, said festival board chairman Harold Matzner, because they have the best chance of being nominated for Academy Awards. He noted that 10 of last year’s 11 honorees received Oscar nominations and said boldly, “This year’s honorees are of that same magnificent quality and are bound to experience similar success.”

But the presenters, including Brad Pitt, Robert Downey Jr., Shirley MacLaine and Michael Keaton, were actually more iconic than honorees. Instead of having to wait until the end of the three-hour event for a “gala moment,” the record-smashing audience of 2,400 formally-clad people got a treat before former “Entertainment Tonight” host Mary Hart was ushered on stage to emcee the evening.

Pitt, a producer of “Selma,” introduced Oyelowo with the male Breakthrough Performance Award by trying to teach the crowd how to pronounce his name. He admonished them when they couldn’t get it right, saying, “You’re going to be referencing this name for years to come. You might as well get it right tonight.” So then he had the audience sing each syllable of his name.

Oyelowo made his entrance and said, “You know you have broken through when Brad Pitt sings your name. Wow!”

Downey, a producer and star of “The Judge,” entered the stage to an orchestral version of “Iron Man,” wearing red tinted glasses and a loose tie and raising his arms to bask in his applause before presenting the festival’s Icon Award to his “Judge” costar Robert Duvall. He said Duvall earned icon status for his work in films such as “M*A*S*H*,” “The Godfather” trilogy, “Network,” “Apocalypse Now” and “Tender Mercies” (for which Duvall won an Oscar). Then he elicited the evening’s first standing ovation by telling the audience, “This is generally where people stand up.”

Duvall, who won a Career Achievement Award at the 2011 festival gala, said, “I don’t even know what an icon is!” But he teared up as he began to talk about his parents, who encouraged him to go into acting as a profession even before he did any amateur acting.

Steve Carell, presenting the female Desert Palm Achievement acting award to Julianne Moore, his costar in the upcoming drama, “Freeheld,” ran with Pitt’s musical name game theme. Throwing away the script written for him, Carell sang, “It’s pronounced Julie, Julianna…” He also said, “She’s one of the most genuinely nice people I have ever met. And I have met Tom Hanks and Meryl Streep, and she makes them look like (bleeps).”

Moore, wearing a genuinely odd shoulderless red dress, humbly responded, “I can’t believe how many times he said my name, like nine, 13 (times).”

She saved her hyperbole for her introduction of her male counterpart for the Desert Palm Achievement Award, Eddie Redmayne, whose portrayal of the ALS-afflicted Stephen Hawking in “The Theory of Everything” took him down a similar path of physical deterioration as Moore traversed in “Still Alice.”

“He beautifully articulated this physical state,” Moore said, “which meant that Eddie lost the actor’s tools of voice and movement, and he was still able to express Hawking’s essence with very little gesture, but a tremendous amount of grace.”

Redmayne thanked his director, James Marsh, who he said “took a punt on me” for the role, but also acknowledged the remarkable person he portrayed and the family who went with him on “this incredibly passionate and emotional journey.”

More off-the-cuff introductions were offered by other iconic presenters. Keaton, presenting the Director of the Year Award to the man who guided his comeback in “Birdman,” said he left his notes in his car. Then he eloquently explained what a remarkable job Alejandro González Iñárritu did in eliciting great performances from his cast and crew.

MacLaine, who received the festival’s Lifetime Achievement Award in 2006, presented Richard Linklater with the Visionary Award for his direction of “Boyhood,” by essentially saying Linklater never instructed her on how to perform or even what to wear when they made the movie, “Bernie.” But then she realized he was a true visionary because “he allows complete freedom. You don’t care about pleasing the director. You care about pleasing the character.”

Jason Reitman, who has directed J.K. Simmons in films such as “Up in the Air,” “Juno” and “Thank You For Smoking,” presented him with the Spotlight Award by saying “There isn’t a moviegoer alive who hasn’t been touched by one of his performances.” Simmons acknowledged that Reitman was responsible for getting him his part in “Whiplash” for which he was being honored.

The Ensemble Award, always the supreme prize at the Screen Actors Guild Awards, was the penultimate prize at this gala, with director Morton Tyldum presenting the award to his cast of “The Imitation Game.” Tyldum praised his cast, including attending actors Benedict Cumberbatch, Allen Leech, Matthew Bear and Alex Lawther, saying, “nothing would work in this movie without each of its irreplaceable parts.”

But Cumberbatch, speaking for the cast, said there wouldn’t have been a movie if not for the work of Alan Turing, the belatedly-celebrated gay genius on whom “The Imitation Game” is based.

The final position in the awards ceremony was given to Reese Witherspoon, the 2006 Oscar winner who was presented the Chairman’s Award by Laura Dern for her performance in “Wild.” Dern, who played Witherspoon’s mother in the film, praised her performance and her job as the producer for adapting Cheryl Strayed’s memoir.

Witherspoon said she felt compelled to tell Strayed’s story of how she walked 1,100 miles on the Pacific Crest Trail following her recent divorce and death of her mother despite having had no backpacking experience and having shot heroin just two days earlier.

The gala, which began with the presentation of the female Breakthrough Performance Award to Rosamund Pike for her performance in “Gone Girl,” played to a crowd of 2,400 industry people, plus a contingent of Goldenvoice officials who produce the Stagecoach festival that Witherspoon says she attends. The gala grossed $2.4 million for the nonprofit Palm Springs International Film Society, roughly $100,000 more than last year.

More than 200 security people were employed for the gala and guests were made to go through metal detectors. A parking snafu cause the gala to start a little late and go a little long. But it raised funds for the programming of not just this festival but also the summer ShortFest.