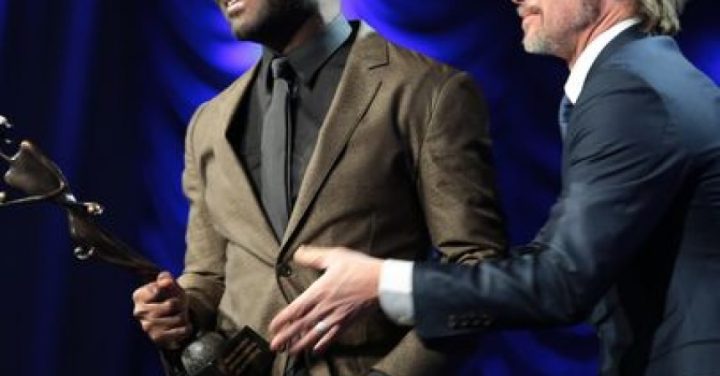 Awards contenders who hit the trail to the 26th Annual Palm Springs International Film Festival this weekend were talking about the breathless pace of this year’s race. No sooner had the last Rose Parade float left Colorado Boulevard on New Year’s Day did a herd of Oscar hopefuls head to the desert for the next phase of this wide open awards season.

Earlier than ever, Saturday night’s PSIFF awards gala – timed to land right in the middle of the crucial Oscar nominating balloting – brought out a bevy of contenders who were receiving pre-negotiated trophies at the glitziest ceremonies
this side of theGolden Globes (which take place in a week, also disturbingly earlier than normal).

They all got to try out speeches they might get a chance to deliver at the Golden Globes or the Oscars, if they’re lucky. Even presenters like Steve Carell (for Moore),Michael Keaton (for Inarritu), director Morten Tyldum (for his Imitation Game cast) and Laura Dern (for Witherspoon) are contenders in their own right. Even they had an opportunity to make an impression on the gigantic Palm Springs Convention Center stage in front of a silver screen that even eclipsed the Cinerama Dome‘s.

But it was probably two other Best Actor possibilities (although further down the list in this uber-competitive year) – Robert Downey Jr. presenting to co-star Duvall andBrad Pitt presenting to Oyelowo, star of his production company Plan B’s Selma – who made the greatest impression of all.

Early in the evening, Pitt had the crowd in the palm of his hand as he taught them to correctly pronounce Oyelowo’s tricky name (O-yellow-o). First you had to try to say it in unison, then with Pitt leading the chorus, you had to try to sing it. The actor was clearly having fun and it got the three-hour-plus show off to a great start early on. Breakthrough winner Oyelowo charmed the crowd when he said in his acceptance, “you know you have really broken through when Brad Pitt sings your name!”

And Downey, wearing sunglasses, was the epitome of RDJ Cool, before getting serious about Duvall.

“Did you see my Mercedes parked out in front?” Downey said. “That’s called preferred parking. And you would think Cartier could give me this watch instead of asking for it back at 7:30 tomorrow morning!”

Both superstars came on relatively early in the show and really got the crowd going. Some of the other speeches could have used editing, particularly PSIFF Board Chair Harold Matzner, who took his time thanking the less-famous, but deep-pocketed donors in the room. But Matzner, who puts on this key awards event each year, did succinctly point out its importance to the industry and why so many showbiz types make this annual trek to the desert.

“Last year we are proud to say that 10 of our 11 awards gala honorees were nominated for Academy Awards,”  he said. “This year’s honorees are that same magnificent quality and we believe bound to experience similar success with Academy voters.”

And ain’t that what this is all about? Sort of. When then-Mayor Sonny Bono came up with the idea more than a quarter century ago, it was a good one, guaranteed to bring big bucks into the city. And a big, less publicized part of it is still the actual movies,particularly the long list of Oscar-contending foreign-language films this fest specializes in. Fest director Darryl MacDonald and artistic director Helen du Toit have made spotlighting those contenders a particular festival focus.

But for all that, I doubt Bono could have predicted the festival would also become one of the must-stops on the awards circuit for its glamorous, if sometimes garish, trophy trot, replete with a full orchestra on stage playing honorees on with their movies’ theme songs.  No expense is spared for this thing. Even the centerpieces utilize 19,000 flowers assembled by 45 designers.

I have to confess this all is one of my awards-season guilty pleasures. You just have to admire the sheer scale of it. Tons of volunteers urge every attendee to hit the red carpet and they applaud you as you walk into the cavernous ballroom, which is filled to the rafters with 2400 attendees.

Somewhere in the dead center of all those tables sit the honorees and their entourages from the studios and distributors who arranged these awards for their best and brightest  Oscar hopefuls. But the best thing these contenders can do for this opportunity is to make a coherent, concise speech that turns on the crowd (which does include more than a few Academy voters). To that end, most did nicely.

Even the ones who needed editing can benefit from a Palm Springs push. This is a place where you can really get your campaign rolling. I recall last year’s PSIFF Actor winner Matthew McConaughey really ignited the audience with his speech, setting a tone that took him all the way to the Oscar. If anyone did that this year, it was probably Redmayne, who hit all the right notes in a classy acceptance.

I would say the same for Benedict Cumberbatch, the appointed speaker forThe Imitation Game cast. He was eloquent, funny, thoughtful and touching in talking about Alan Turing, the cryptology and computing pioneer whom he portrays in the movie. It was a sincere, textbook-perfect acceptance. He was amusing too in explaining the absence of co-star Keira Knightley.

“She got mixed up and thought this was in Palm Beach,” he said. “She’s enjoying a nice tan right now. Not really. She’s ill and couldn’t make it.”

At the ridiculously crowded Parker Hotel after party Cumberbatch told me they wanted him to use a teleprompter for his speech but he nixed it, preferring to go off the cuff. It worked, right from the Chariots Of Fire slow-motion run he and his castmates made in entering the stage. He told me they had planned even more gags but he forgot them when he was up there. He also paid a high compliment to his friend and one-time co-star (on The Other Boleyn Girl) Redmayne.

“Eddie, I thought did such a beautiful speech and such a job of encompassing everything from the personal to the film to Stephen to the subject matter that when he was up there talking I felt my head exploding,” Cumberbatch said. “There are just so many different ways to go with this.”  He chose the right way.

As did Redmayne, who lavished praise on Moore, his presenter who had played his mother in Savage Grace, a film about an incestuous relationship. At the Parker afterparty, Redmayne still was talking about how great Moore was to work with and how she helped him get that early role.

“In the end, she fought for me in a way that had never been done for me before,” Redmayne said. “And that was so lovely of her to do this tonight.”

Redmayne also mentioned on stage he had just married two weeks ago, and told me how he and wife Hannah spent their honeymoon.

“We went skiing in the Alps,” he said. “Unfortunately there was no snow, just a lot of sunshine. A few more freckles. It was just great being away from everything and being super relaxed. “

Then he jumped back into the awards-season grind where he’ll spend this week with multiple Q&A sessions before prepping for The Danish Girl, his next film,which starts in a month and a half.

The show may have run long, but it had many highlights, from terrific career tips by Duvall (deservedly getting the evening’s only standing ovation) and Shirley MacLaine, who presented to her Bernie director Linklater and reminisced about working with Hitchcock, Wilder and Wyler along the way. There was Carell’s charming intro for recent co-star Moore, to  the genuine warmth and respect between Keaton and Inarritu, and particularly between Witherspoon and Wild co-star Laura Dern.

And Simmons, whose award was presented by his frequent director Jason Reitman, seemed genuinely touched by the recognition for Whiplash after decades of journeyman acting work on stage, TV and in movies.

Simmons was soldiering through painful back spasms all day. I was happy to moderate a 45-minute “Talking Pictures”  conversation with him earlier Saturday but, despite the pain, he got through it like a true pro and the Palm Springs film fans loved him.

Now Simmons is headed to Monday’s New York Film Critics banquet, where he will get yet another of many awards in the next few weeks.  It’s that thing you do this time of year.