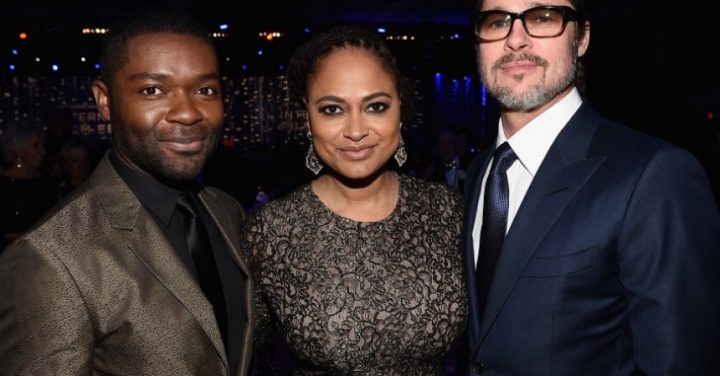 And they’re off! A good chunk of likely Oscar contenders popped by the 26th annual Palm Springs International Film Festival Gala Saturday night to test acceptance speeches, curate cuss words, and poke fun at the interesting-looking prizes that the good folks of at the Palm Springs International Film Society hand out each year. The largest crowd yet (this thing just keeps getting bigger and bigger) stood outside in the cold temps to get a peek at big-timers like Brad Pitt, Julianne Moore, Robert Duvall, Benedict Cumberbatch, Eddie Redmayne, Shirley MacLaine, Robert Downey Jr., Steve Carell, Peter Linklater, and Reese Witherspoon among many others. They were joined by an enormous line of party-goers who got stuck in a security and metal detector line that was longer than Christmas at LAX (Chairman Harold Matzner apologized onstage).

Pitt started out the night, quieting the 2,400 partiers to pronounce Selma actor David Oyelowo’s name correctly by leading a sing-along, “How the hell do you pronounce his name? I’m here to help…O-Yel, O-Yel, O-Yel-ow-o. Everybody!” Oyelowo hit the stage beaming. “You know you have broken through when Brad Pitt sings your name,” he said. The actor, who portrayed Martin Luther King Jr. in Ava Duvernay’s film, got choked up while accepting his award. Another emotional fella, Robert Duvall (who picked up an Icon award from new Judge pal Robert Downey Jr.), also got a bit choked up himself. “I’m getting a little emotional. Usually they pay me for that,” he joked. Duvall happily rambled (gotta love him) about everything from his love for Robert Downey’s Jr.’s shoes and of Westerns (“Which is really my favorite medium”) to the books both he and his wife are currently reading—“She is reading the definitive book on Churchill and finished Empire of the Summer Moon, and I love sports, so I just finished a book on Lionel Messi, the great Argentine soccer player.” He stopped short of telling everyone what he’d had for breakfast.

J.K. Simmons and Julianne Moore were both dry-eyed while delivering their speeches (sigh, I lost money–shoulda bet on Duvall and Oyelowo), which were both a bit goofy and off-the-cuff. Moore even threw in a jab at her dress before anyone else could. “I love crazy orange dresses,” she said. From the cheap seats, it looked a bit like a ketchup package that someone squeezed at the bottom. From worst dressed to best dressed, Rosamund Pike’s Alexander McQueen number was stunning. She had this to say about landing the plumb lead role in Gone Girl: “As every actor in this room knows, after bingo! comes f–k!”

Benedict Cumberbatch and the cast of The Imitation Game picked up the Ensemble Award. Most of the cast made it to the show with the exception of Keira Knightley. “She thought this was taking place in Palm Beach,” Cumberbatch joked before fessing up that Knightley was under the weather. Reese Witherspoon summed up the feel-good festival gala the best, saying, “I can’t tell you how lovely it is for you to come into the door and people are applauding.” She was referring to the gala’s longtime tradition of festival volunteers clapping for the honorees all the way into the ballroom. It’s like the casual Oscars, except that, well…everyone knows they’ve already won.

Partiers went home with a crystal red apple (there is always some kind of tchotchke).